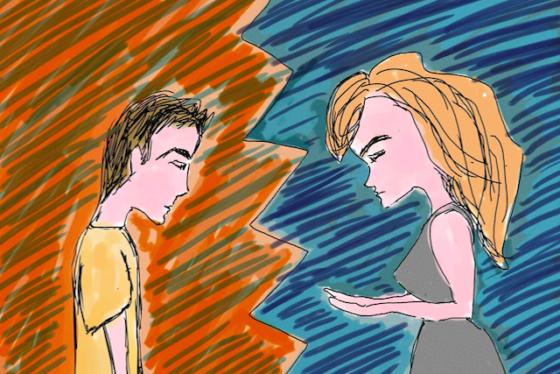 Ending the Cycle of Breaking Up and Getting Back Together

“As soon as you trust yourself, you will know how to live.” ~Johann Wolfgang von Goethe

Almost all of my romantic relationships have had some kind of long ending. At some point I’ve gained clarity on the relationship, I’ve acknowledged the truth that it’s not working out, and then I’ve ended it.

I would like to say that was the end of the story, that I moved on each time with peace and ease. But the reality is that I second-guessed myself and ended up excusing all of my partners’ faults to justify giving them another chance.

There have been significant studies that show that our brains literally become addicted to our partners. But our relationships also have an emotional attachment. Oftentimes our partner fulfills some kind of void for us, particularly from childhood.

Maybe we want to know that our partner will put us first or will never leave us, or maybe we want to feel that we are worthy of being loved unconditionally. These wants make it difficult to go through with a breakup — even when it’s for our own good.

To have a healthy separation, we have to understand that breakups are huge obstacles to overcome, and have compassion for ourselves as we navigate the intense emotions.

It’s important to know yourself and what you need to do to move forward. Even then, it can prove difficult to remain steadfast. Breakups can re-open deep wounds that evoke powerful emotion.

Flip-flopping in relationships is a sign that we aren’t clear on what is best for us or how to give ourselves what we need.

We’re dealing with the intensity of feelings and the brain’s addiction, so we have to learn how to gain and maintain clarity for ourselves. The back and forth shows that there is doubt and uncertainty. It shows us that we aren’t abiding by our own truth.

Two months later (and in a depression), I convinced myself I had made a mistake—that I just needed to accept him as he was and we would be fine—and I asked for him back.

That lasted maybe a month. Then two more months passed, and we got together to exchange belongings. Feelings opened back up, and we spent another month or two together. It ended again.

Four months apart. I was doing great. I was strong. Then it was my birthday, and he popped up. Two more months together. And then reality hit me.

The truth was that the relationship had depleted me completely. I had no energy for myself. I had no ability to be truly happy when we were together because I was giving all of myself to him. He was pulling on me to fill his voids, and I was depleting myself in an attempt to acquire his love.

The back and forth was exhausting and a little embarrassing.

I could never wish those encounters didn’t happen, because I learned tremendously from each one of them. But now I’ve learned the lesson, and moving forward I know how to stand by my own side and cultivate relationships that are balancing and harmonious.

This particular ex recently popped back into my life, and this time I was prepared. I’d done deep work on myself since our last communication. I understood the root of my attachment to him, and I realized that I was punishing myself for “messing up.”

I had wanted his love back, at any expense to my own well-being. I also had a deep realization that I am worthy of a healthy partner, someone who can have an equal exchange of depth and intimacy with me.

Recognizing these truths and putting my happiness before his allowed me to put up firm boundaries so we could have healthy communication.

Having boundaries is an act of respect for yourself. It shows you and the person you’re in communication with that you value yourself first and foremost.

I was very clear within myself (and later with him) that I was not willing to open up any door that would lead down a road that was unhealthy for either of us.

I was no longer willing to put myself out for him, but that doesn’t mean I wasn’t willing to give him some of my time. I was able to show him compassion and still be true to myself.

I also know that I am where I need to be—without him as a romantic partner. And I have faith in my own path. I know the only thing I need to do is to connect with the deeper part of myself and allow it to guide me.

We all know what is best for ourselves, even in the times when we feel most confused. Trusting our inner voice, even when it may sound tiny and muffled, is the key to ending the cycle of breaking up and getting back together—and the path to a healthier, happier relationship.

Breaking up image via Shutterstock

Michelle D’Avella is an author, Breathwork teacher and mentor. Her memoir, The Bright Side of a Broken Heart is available here. Download her FREE guide to heal your heart and follow her on Instagram for daily doses of inspiration.

If you are going through a difficult relationship situation and you find yourself clinging even more, reach out directly to any one of our seasoned psychic advisors. Not only can they offer clarity on your connection, they can also provide invaluable spiritual advice to help you along your path.