PsychicTXT | What I Learned from Loving the “Wrong Person” and Why I Don’t Regret It - PsychicTXT
3341
post-template-default,single,single-post,postid-3341,single-format-standard,layout-2cr,ajax_updown_fade,page_not_loaded,,large,shadow3 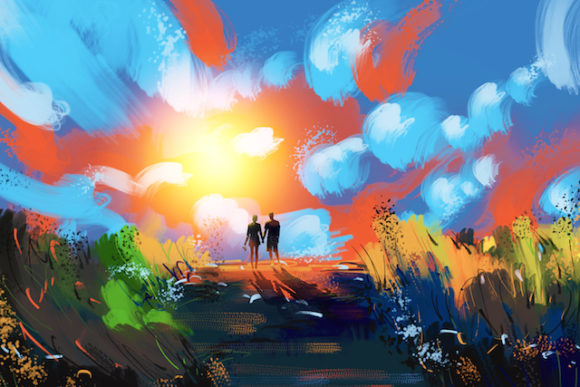 “Some people come into your life for a reason, some a season, and some a lifetime. However long it was, be thankful for the gifts you received from them.” ~Unknown

When I first met him, we instantly clicked. We became fast friends aided by the fact that I was dealing with my father’s death and he was by my side whenever I needed someone. He was empathetic, easy to talk to, and very open. I related to him immediately.

Early on, it became clear to me that while we were friends, we would not make a good romantic pair. We had extremely opposing political views and philosophies on life, as well as different communication styles.

For example, in the beginning we would get in arguments about religion. I consider myself spiritual, but I am not very religious. He would constantly try to get me to have religious conversations with him. From my point of view, it felt as if he was trying to push his beliefs on me. It was exhausting. I didn’t feel respected or heard in my spiritual journey.

I also felt like he was a different person, depending on what group he was with, which made me uneasy. I try to be authentically me wherever I am, and I love who I am. As he shifted personalities, it was very confusing to me. It made me wonder, “Who are you really?”

My friends shook their heads, telling me he wasn’t good for me. “Angela, he is too judgmental,” they’d say. “I just feel like there is something very off about him; he makes me nervous.”

As I got to know him better I suspected that one reason for his behavior was that he had previously been involved in an extremely toxic relationship. In fact, it was so dysfunctional that law enforcement got involved.

It made me ponder, “Do I really want to be with someone who attracts this kind of relationship into their life?” But I stuck by him during that time because he had been so present in my life when my father passed. I believed he deserved the same thing from me.

On the day he kissed me, things started to get fuzzy. When we were alone, things felt very relationship-y. However, when were in our regular environment, we acted like best friends. I told myself that I could balance the division, but I couldn’t.

I started to shove the multitude of reasons we shouldn’t be together under the rug, only to take them out occasionally to shame myself for wanting to be with him.

As the months passed by and our weird relationship continued, I realized I was starting to have authentic feelings for him. I was wearing rose-colored glasses and only saw the good parts of him, but I still didn’t feel right about the nature of our relationship.

One morning it finally hit me. I’d had a dream that he slapped me across the face. In the dream, I was sobbing, begging him for forgiveness as I held my hand over my black eye. I woke up crying because the dream felt so real. While in “real” life he had never physically hurt me, I realized I was feeling disrespected emotionally by him and myself. I knew I had to make a change.

I broke things off with him about a week after that. It was beyond difficult. He was mature about it and apologized for his part in the ordeal, but it was not the route I wanted to go. So many parts of me wanted to go on acting like nothing was wrong, but my heart knew that it wasn’t a path I could travel any longer.

While loving someone “who is not right for you” can be painful, you can also find some amazing lessons. Love isn’t always meant to stay forever. Sometimes it only stays for a season, but that doesn’t make it any less beautiful or valuable. Here’s what I learned from my relationship.

1. Sometimes even when we know something won’t necessarily end well, we still have to go through it.

When we took our relationship to the next level, I knew in my gut that this was likely not going end in a happy way. I would never change to be the agreeable, conservatively Christian girl he wanted to date and eventually marry. My mentor told me. My sister told me. My friends told me. But, I still wanted to go through it. Why do we this?

I remember talking to a therapist a few years ago about this phenomenon. She said, “Honey, we aren’t here on this earth to rise above life. We are here to walk through the mud. The magic is in the mess.” We learn our lessons by going through intense life experiences, not by skipping through them.

2. We need to release the shame.

This goes along with lesson one. Shame is such a tricky emotion, and one I wrestle with daily. I felt so much shame for having feelings for someone I knew in my heart was not the best person for me. I would beat myself up constantly. I realized that if I wanted to move on I had to stop putting myself down. Shame was keeping me stuck.

To release the shame, I would talk to myself like I would talk to my best friend. My best friend went through a similar situation this past summer and I always told her, “Honey, I don’t know if this is going to end well and this doesn’t look healthy. However, if this is what you need to go through for your growth, I will be here to hold your hand and catch you when you fall.”

After she moved on from the situation, she told me how much this meant to her. “You were the only friend who didn’t judge me. You acknowledged my journey. It helped me move on a lot faster to have someone accept me exactly where I was.”

In this case, I needed to be my best friend. I wish that in the past, I would have metaphorically taken my own hand and told myself that I would be there for myself through the mess. I needed to do that for me.

I realized that part of the reason I’d chosen to be with this man was that I wanted to give and receive love. That’s a beautiful thing. I love loving people romantically. It feels great, and when it was just us, living in the present moment, it was a beautiful experience.

4. Acknowledge the dark parts in yourself and love them.

I have been involved in mindfulness studies since I was sixteen. I hold myself to a high standard and want to be an example of a mindful being, but I am still human.

There are still parts of me that seek love out of neediness and wanting to be accepted. There are parts of me that are attracted to fixing people and feeling in control. While I have worked through a lot of pain and trauma in my life, there’s also still this little girl inside of me who wants everyone’s approval. These are parts of myself that I work on daily, but I have to be patient with myself.

Lots of times we attach to beliefs about ourselves at a very young age and we have to peel them away layer by layer. It can take a long time. Patience is required. However, I think this process is what makes it beautiful. Life is not a race; it’s a journey.

While this love story will not end in a relationship status update on Facebook or a proposal, it ended with some beautiful memories and some even more extraordinary lessons. I realized I don’t regret our kisses. I don’t regret sharing my secrets with him. And I especially don’t regret loving him. Instead, I choose to be grateful for how the relationship helped me grow.

Angela Lois is a twenty-one-year-old musician, writer, and self-growth enthusiast. She is extremely passionate about mental health and mindfulness and dreams of turning her passion into career that allows for growing and healing of individuals from all different areas of life. Angela plans to start her mindfulness blog, Touching Heaven before the year is over. Email her at dancingviola2@gmail to connect!

Did you recently end a relationship? Are you still upset about it and have many questions about your time with this person? If so, reach out directly to any one of our talented advisors and get the insight you need to ensure a better tomorrow, today.