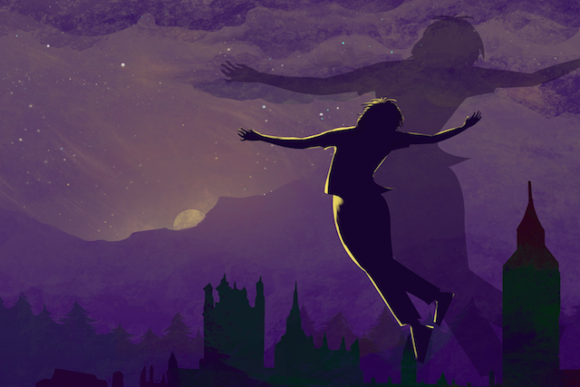 When I was in my early twenties I was lucky enough to spend about a year living just a few blocks from the beach in Virginia Beach, Virginia, but you know what I remember most distinctly from that time? Sitting at a red light on the way to work one day thinking: I feel trapped.

To put it simply, I felt stuck in a life I didn’t want.

I had a college degree I wasn’t using. I had a job that I dreaded. I had no idea where I was going or what I was doing, and I certainly had no idea how to get to the next thing, whatever that was.

By the end of that year, I’d managed to move away from Virginia and was living back in Vermont, a place I’d originally landed at for a few months right after I finished college. The trapped feeling was gone, at least for a little while.

I was able to go from seasonal job to part-time job and back again for about a year, and that helped me feel not quite so tied down. Eventually I left Vermont and moved to the mountains of North Carolina.

Over the years, that trapped feeling wrapped its tendrils around my chest and squeezed a number of times, but recently I realized I haven’t felt that way in quite a while.

What was it that made me feel so trapped in the past? Why haven’t I been feeling that way anymore? For me, I think it comes down to career and identity. I spent much of my life wondering what I wanted to be when I grew up, and went from job to job, often ending up feeling like I was caged in.

I had a job working at an inn that I really loved. Sometimes I was bored, but mostly I felt at least a little freedom, especially once I was the boss and could make my own schedule.

After a few years of that, I took a job at an airport that was such an awful fit I can’t even put it into words. I was bored, lonely, and anxious, and caught more colds than I ever have in my life.

There was some good in that job, though, in that I started expressing my creative side again, something that had been dormant for a long time. Being miserable also forced me to take a look at the choices I was making in my life and career.

I had other boring jobs after that one, and then one really terrible one that went against just about every moral fiber in my body. The owners made their politics very clear and they were the polar opposite of mine. I was expected to be on call almost all the time; if my work phone rang when I was at home, fear filled my heart.

Once again, I felt trapped.

It was worse than ever at this job because I was the sole breadwinner while my husband was in school. I knew it was a terrible fit, but I felt I couldn’t leave.

Looking back, though, while all of that was going on, I was refining and honing what it was I truly wanted and who I truly was.

I read a zillion self-help and career books. I took a life coach training program. I started meditating.

Most importantly, I started listening to myself. Or maybe I should say my Self.

I started following the things that felt true to me. Being inside an office all day simply was not working, and I wanted to work for myself, not for someone else.

I left that last terrible job nearly four years ago, and visits from those tendrils of terror don’t come very often anymore, despite the fact that I’m much more tied down than I ever have been before (hello mortgage, car payment, husband, two cats, and child).

The bottom line is that I finally feel like I’m living my life instead of someone else’s.

I do hold a job again, but it’s super flexible, doing something I mostly enjoy. I create art almost every day, and both the process of putting colors to canvas and earning money from something I enjoy so much bring me big feelings of freedom.

I also get to be outside in the middle of the day, which brings me more happiness than I ever could have imagined. I get to set big goals and move toward them at my own pace. I get to control my life in ways I didn’t before.

I feel like me, and it feels so good.

Here are some steps of the steps I took to get from there to here, and that you can try, too, if you feel trapped in your life.

Listen to your body. This has helped me more times than I can count. If your chest feels tight, if your stomach is in knots, if your shoulders are up to your neck, or if you feel just plain off, you need to stop and listen to what your body is telling you.

Your body is the animal part of you, in touch with your deepest needs and desires. It’s your brain that keeps interfering and telling you the kind of life you “should” be living. Try checking in with your body at least once a day and seeing what makes it feel open and relaxed, then do more of that.

Know you can make progress even if it doesn’t feel like it. For years and years I tried to get out of that cycle of being stuck in a job I hated, trying to do something new but then realizing it wasn’t the right fit, and then starting the whole thing over again. It’s only looking back now that I see I was getting closer and closer and learning more and more each time I did something different—I just didn’t see it at the time.

Take the tiniest steps possible. When I was in that job that I really hated, it would have created more stress and anxiety in my life if I’d quit, since I was the one bringing in the money and because, about a year after I started the job, I got pregnant and needed the health insurance. So I took tiny steps while I was there: I made art on the weekends, I took an online class about building my own business, I went outside and walked by the ocean a lot.

If you do anything, and I mean anything at all, that moves you closer to a place of peace or excitement, please give yourself a pat on the back. There is nothing wrong with congratulating yourself and telling yourself what a good job you’re doing. It will keep you moving forward and help you build momentum.

Look for the positive. There is something good in all of our experiences if we take the time to look for it. That job was a positive for me because I could support our family while I was there, and because I learned what I didn’t want in a job.

I feel the same about all of my jobs and even all of my past relationships. Even if it wasn’t the right fit, I learned something about myself and what I did or didn’t want out of a job or a partner.

Every time you experience something, you can learn from it and use it to move away from what you don’t want and toward what you do want. Focus on the good you’re finding, and more good comes. Focus on the bad you’re feeling, and the more you’ll feel bad.

Learn to live with uncertainty. You just can’t know everything, and that’s okay. I got a life coaching certification, personal training certification, and master’s degree in health education before I realized that none of that would help me feel free. Until I found it, I didn’t know what would give me that feeling, and I was (mostly) okay with that. I was trying new things, seeing what felt right.

You don’t need to know exactly what’s going to happen to know you’re on the right path. So long as you’re taking chances and learning about yourself, you are.

Lastly, don’t discount little things that make you happy. I used to think that art was just something that I did when I was a kid that couldn’t amount to much, and the pleasure it brings to me in my adult life, both on a personal and professional level, is tremendous.

If it feels good, go toward it. If it feels bad, move away from it, even if you have to do it slowly.

You don’t have to feel trapped in a life you don’t want forever. You can make changes, even tiny incremental ones, and get into a life that feels just right for you.

Jen Picicci is an artist who believes in better living through pretty colors and kind words. She creates uplifting tree and word art, and when she doesn’t have a paintbrush in her hand, she can be found wrangling a preschooler, petting a cat, or hugging a tree. To learn more about her and get a 20% off coupon, visit www.jenpicicci.com.