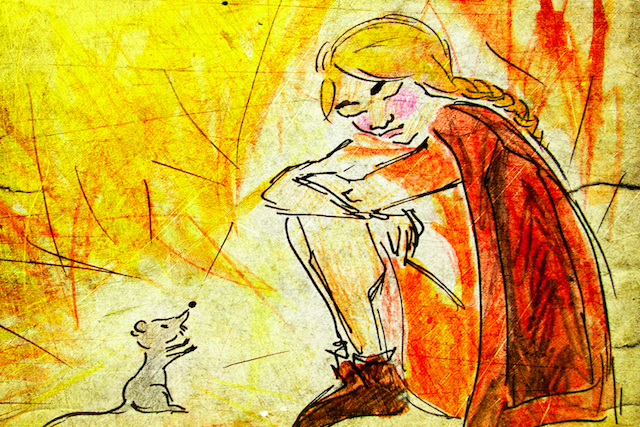 The Wounds of Rejection Heal With Self-Love and Self-Awareness

There is no magic cure, no making it all go away forever. There are only small steps upward; an easier day, an unexpected laugh, a mirror that doesn’t matter anymore.” ~Laurie Halse Anderson

It began in elementary school. I was a chubby immigrant with a thick accent and hand-me-down clothes. I so badly wanted the other kids to like me, and I had no idea why everything I said and did seemed to push them away.

My jokes and comments would trigger awkward silences or ridicule—especially in groups. Those moments were traumatizing, but they were also confusing. How could I make them like me?

As I learned English, I found some company in the schoolyard, but I continued to be bullied for my weight, my clothes, my face that turned red so easily. It didn’t help when I started going through puberty at age nine, younger than every other girl in my class.

In elementary school, I remember walking home one day when two boys followed me, calling out things like “Put on a few pounds this year, haven’t you?” I remember staring at my feet, putting one in front of the other, walking home as fast as I could.

The wounds of being rejected, bullied, and ostracized buried deep. I never felt safe unless I was completely alone.

In high school, I remember walking home once and realizing that a popular guy from a grade above was walking behind me. He didn’t say anything to me, but my heart started beating wildly and I became hyperaware of my arms swinging back and forth. How awkward were these long appendages coming out of my body! How awkward was I!

Even though I would walk home as fast as I could, I didn’t feel any safer around my family. In my parents’ house, emotional expression wasn’t encouraged or accepted. The only safe place was alone with myself.

But as time went on, the anxiety I felt about other people’s opinions of me crept into my alone time too. I worried. I ruminated. I overanalyzed.

It was difficult to live in fear all the time, so I developed all kinds of ineffective habits that helped me feel in control. I starved myself. I lied. I got addicted to anything I could get my hands on.

I’ve been on a long journey of healing—not only the toxic ways I had learned to avoid feeling discomfort around other people but also the scars that caused that discomfort in the first place. The path has been long and hard. I’m still walking it.

I’ve learned a few things that have been helpful. For example, I’ve learned to find the thoughts that trigger anxiety in social situations and question them. I’ve found the places in my body where I tense up when I think this way, and I’ve learned how to relax them.

I’ve learned that the feeling of rejection won’t kill me (while running from it almost did). I’ve learned to sit with all kinds of uncomfortable emotions without running away.

I’ve learned that working out before social occasions lowers the chance of being triggered. I’ve learned that allowing some time afterward to replay social situations in my head actually helps—as long as I give myself a time limit and wrap up with some self-loving thoughts when the time is done.

I’ve learned that, sometimes, I should actually take the advice of my self-judgment and change how I talk to people. I’m still learning about which advice to take and which to leave. I’ve learned to be gentle with myself while I figure it out.

When I first went a few months without falling into a deep self-judgment hole, I thought I was cured. I thought I would feel free in social situations forevermore. But life had other plans.

I have learned to think of social anxiety and fear of rejection as allergies. I’m allergic to thoughts like “Do they like me? What should I do to make them like me? What did I say wrong? What should I do so they don’t think I’m weird?” Most of the time, I can avoid falling into old patterns. I hear those thoughts and think, “Nope, I’m allergic to that. That’s not good for me.”

But sometimes, I don’t catch the thoughts until it’s too late. Or I start having them when I’m tired or stressed out. Or I experience a series of rejections and don’t have enough time to process through them before my emotions and thoughts weave into a tight downward spiral.

It happens. It happened last week. It lasted for four days. I’ve learned to forgive myself, be gentle, and know that I’m doing my best.

I have friends with celiac disease who experience side effects for at least a few days when they eat gluten. At that point, the damage has already been done. The only thing they can do is not make it worse. So that’s what I try to do as well.

I try not to judge myself for being stuck in self-judgment for a few days. That makes it easier to deal with. I try to think of it as my mind being swollen and sick. It needs time to heal. It needs love and patience. It doesn’t need more of the thing that made it sick in the first place.

I used to want to get rid of this for good, but lately, I’m realizing that maybe I never will be. Maybe it really is like an allergy. No matter how well I can learn to avoid the things that make me feel horrible, they will always be bad for me.

Although these episodes are still unpleasant, I no longer feel helpless when they come. I’ve been practicing. I feel a sense of accomplishment each time I can navigate through periods of self-doubt with self-love and honesty.

I can’t control what makes me sick, but I can be a kind, loving nurse to myself when I get that way. And that gives me some sense of control over the situation.

However small, there is always room for a choice. And instead of focusing on what I can’t do, I’m trying to focus on what I can.

It’s a hard road. If you’re in the middle of a similar journey, I hope you’ll cut yourself some slack and give yourself some credit for how far you’ve come. You’re doing the best you can, and that’s more than enough.

Like every human being, Vironika Tugaleva is an ever-changing mystery. At the time of writing this, she was a life coach, digital nomad, and award-winning author of two books (The Love Mindset and The Art of Talking to Yourself). She spent her days writing, dancing, singing, running, doing yoga, going on adventures, and having long conversations. But that was then. Who knows what she’s doing now? Keep up at www.vironika.org.